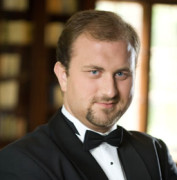 ?Marian Sobula is one of the most talented pianist of his generation?.

Graduate of the Academy of Music in Cracow, Poland from professor
Andrzej Pikul?s class in 2005, Marian Sobula has also completed his studies at Accademia di Santa Cecilia in Rome with professor Sergio Perticaroli (the best 2008 diploma award); additionally he participated in several Master Classes from professor Arie Vardi. In 2011 he received his PhD for Etudes d?execution transcendante by Ferenc Liszt.

He has received a number of awards and scholarships both from national and international foundations and institutions: UNESCO in Paris, JESC in Japan, Italian Government, Ministry of Culture and National Heritage in Poland, Ministry of Science and Higher Education in Poland, Cultural Foundation in Warsaw, Mayor of the City of Cracow and Crescendum Est ? Polonia Foundation. In July 2008 Marian received a prestigious award of the City of Cracow ?ARS QUAERENDI? for his remarkable activity in the development and promotion of culture.

Since 2008 Marian Sobula has been working in the Piano Department of Academy of Music in Cracow (Poland) and conducted master classes in: Academy of Performing Arts Bratislava, Hochschule fur Musik und Theater Leipzig, Conservatorio Nazional Lima, Central Conservatory of Music in China. He served as a jury member in competitions for young pianists in Leipzig, Kosice, Shanghai and Curitiba.

Marian Sobula is the President of the PianoClassic Association and Artistic Director of the International Royal Cracow Piano Festival and International Piano Concert Series in Poland.