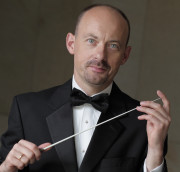 The General and Artistic Director of the Warmia and Mazury Philharmonic and the First Guest Conductor of the Signature Symphony Orchestra in Tulsa, Oklahoma (USA).

Sulkowski holds an extensive opera experience gained during his service as a Conductor (1995 – 2007) and later as the Artistic Director of the Cracow Opera (2006-07) and the Music Director of the Wildwood Opera Festival in Little Rock, Arkansas (USA). He prepared a number of opera premieres, including several world premieres. For example, in 2007, during the Polish Music Festival, being part of the Szymanowski Year, he gave the world premiere of yet unknown K. Szymanowski’s The Lottery for Husbands operetta and recorded it in co-operation with the Polish Music Publishing House (PWM). The Rape of Lucretia, by B. Britten, produced by Sulkowski in 2004, was recognized as the best performance of the year at the Bydgoszcz Opera Festival. Sulkowski co-founded the Cracow Chamber Opera and staged several productions there. In 2008-09, he worked as the Deputy Director of the Polish Radio Choir. Since 2009 till 2011 he was Artistic Director of the Torun Symphonic Orchestra.

Sulkowski has been co-operating with many orchestras and teaching as well at Music Academy in Cracow and of conducting at the Bydgoszcz Academy of Music. Since 1993, he has conducted the Orchestra of the F. Chopin State Secondary School of Music in Cracow with which he travels to France to run educational programmes for the French youth. In 2008, he conducted the Jubilee Concert on the Cracow?s Market Square, with the internationally renowned artist, G. Zamfir. Sulkowski also produced the soundtrack with B. Chajdecki?s music for The Time of Honour historical film series.

In 2010, in Pamplona (Spain) he prepared the premiere of Bizet’s Carmen with the Orquesta Sinfonica de Navarra and the Asociación Amigos de la Gayarre Ópera with very good critics. In 2010 he also prepared the production of Beethoven’s Fidelio – Memory of the Holocaust project, which took place in main polish cities. In 2011, the Philharmonic Orchestra of Warmia and Mazury travelled to Spain, where in Bilbao and Pamplona under his leadership was prepared performances of Puccini’s Tosca. In 2012, with the same orchestra and soloist Eduard Kunz began at the National Philharmonic in Warsaw series Great Piano Concertos.

In 2012, the National Broadcasting Council has appointed Sulkowski in the Programme Council of Radio Olsztyn. Sulkowski received along with the orchestra of Warmia – Mazury Philharmonic award from the President of Olsztyn Statuette of St. James in the field of culture for the year 2012 for the dance show – musical The Nutcracker by Tchaikovsky. In 2013, Warmia and Mazury Business Club, for the arts and popularizing classical music among the inhabitants of the their region, said Sulkowski title and a statue of Personality of Warmia and Mazury in the category of culture. From 2013 member of the board Polish Philharmonic Association. By 2014, conducted by P. Sulkowski Philharmonic Warmia – Mazury received a statuette Laurel “Best of the Best” for achievements and successes of the scale nationwide and internationally for the promotion of Warmia and Mazury in 2013. In 2014 he was awarded the medal Gloria Artis by the Minister of Culture and National Heritage