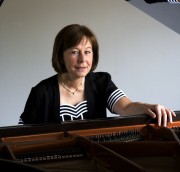 Was born in Cracow, where she started her musical education when she was 7 years old. In secondary school she was the youngest pupil of prof. Zbigniew Drzewiecki. After studying in her native city she obtained her diploma at the Warsaw Conservatory under prof. Jan Ekier. During her studies she won a scholarship from the Chopin Foundation. In 1978 she was selected by the Polish Ministry of Culture to specialise further at Moscow Conservatoire under prof. Lev Vlasenko.

Great influence on her artistic development had a long collaboration and friendship with Irina Rumiancewa. In 1980 she became a laureate of the  Festival of Polish Pianists in Slupsk. After that, she embarked on an international career. In 1987 she made her entry in the ‘South Bank’ in London. In 1988 she commenced her first series of concerts in the United States. In addition, she appeared in nearly all European countries, in Canada, Argentina, Brazil, Urugway, Lebanon, Turkey, Egypt, Kazakchstan, Israel.

After recording LP’s in Poland,  Germany and Belgium, her first CD appeared in 1990 under the Pavane label with music by Szymanowski. A new edition followed in 1993 with the first Sonata and 4 Rondo?s by Chopin.

During the last few years Joanna Trzeciak discovered the music of Johann Nepomuk Hummel. As the result she has recorded 2 CDs with the ‘World first recording’ program. She received a very enthusiastic international reviews, inter alia, five diapasons. In December 2006 she recorded the recital for KNS Classical  with Chopin’s 5 Polonaises and Rachmaninov’s 5 Etudes-tableaux Op. 39. In October 2010, the Chopin Year, she received the Award of Merit of Polish Minister of Culture.