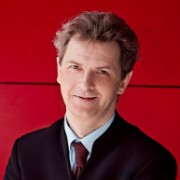 Jacek Rogala is a graduate of the Music Academy in Wrocław (Poland), where he studied composition with Grażyna Pstrokońska-Nawratil and conducting with Marek Pijarowski (diplomas with distinction in 1990 and 1992). In 2011 he received a doctorate in musical arts at the F. Chopin University of Music in Warsaw.

In the 1990s he was assistant conductor at the Wrocław Opera and collaborated as guest conductor with the Capella Bydgostiensis Chamber Orchestra in Bydgoszcz. He perfected his conducting skills with the Cleveland Symphony Orchestra, thanks to an Arthur Rodziński grant.  He also worked at the Music Department of Polish Radio in Wrocław, acted as an adviser for music to the Minister of Culture and the Arts and was Head of the Contemporary Music Department of Polish Radio 2, Warsaw. In 1999 he was Artistic Director of the Grażyna Bacewicz Days Festival organized by Polish Radio and Polish Television. He served as President (2000-2007) and Vice-President (2007-2010) of the Board of the Polish Society for Contemporary Music (ISCM)  and he was Director of the Competition of 20th and 21st-Century Music for Young Performers.  He is the author of the book Polish 20th-Century Music (PWM Edition).

In 2001 Jacek Rogala was appointed Managing and Artistic Director of The Kielce Philharmonic Orchestra and of the ?Świętokrzyskie Days of Music? Festival.

He has to his credit numerous first performances and radio recordings of pieces by contemporary composers and newly-discovered works. His recordings of 3 for 13 by Paweł Mykietyn and Concerto á rebours by Tadeusz Wielecki were placed first at the UNESCO International Composers? Rostrum in Paris (1995, 1999).  The former recording won the Fryderyk Prize in two categories: CD of the Year – Contemporary Music and Best Recording of Polish Music (2009).  A few years ago he started recording a series of CDs with The Kielce Philharmonic Orchestra entitled ?The Polish Album?. In 2007-11 he served as Music Director in five productions of contemporary ballets produced jointly by the Kielce Philharmonic Orchestra and the Kielce Dance Theatre: Passion (P. Łukowiec), Szymanowski ? Ravel. Impressions, It Happened in Jerusalem (K. Dębski), Secrets of the Virtual World (P. Łukowiec)  and Pinokio (M. Weinberg) .