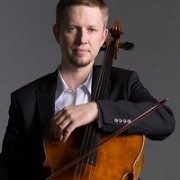 Studied at the Music Academy in Cracow, the École Normale de Musique in Paris and the Staatliche Hochschule für Musik und Darstellende Kunst in Stuttgart under the guidance of Professors: Witold Herman, Paul Julien and Peter Buck. He has also taken part in master classes given by David Geringas, Ivan Monighetti and Arto Noras. He has held grants from Polish and foreign foundations, as well as the City of Cracow, the Malopolska Region and the Ministry of Culture and National Heritage. He has received awards and favourable reviews at numerous competitions and festivals. He has recorded for radio and television, including the cello concertos by Witold Lutosławski (Lebanese National Orchestra, Azerbaijan State Philharmonic) and Marek Stachowski (Beethoven Academy Orchestra). At present he focuses on the cello works by Chopin, Tansman, Rożycki, Stojowski, Lutosławski and Penderecki. In 2014 he has performed cello concertos: K. Pendereckiego (Kalisz Philharmonic Orchestra, cond. A. Klocek); M. Weinberg (Beethoven Academy Orchestra, cond. J. Kaspszyk); Andrzej Panufnik (Tbilisi Conservatory Orchestra, cond. P. Kotla). He holds his own cello class at the Music Academy in Cracow, where he received his postdoctoral qualifications in music in 2015. He has led courses in Bremen, Karlsruhe, Mannheim, Fermo and Tbilisi within the framework of an international academic exchange programme. In 2014 DUX recording producers published a CD with his artistic project Polish Cello Music containing works by polish composers for cello ensembles from one to eight instruments. He is a teacher of the Malopolska Academy of Talents.