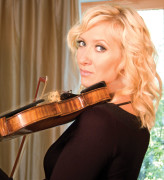 A successful promoter of Polish contemporary music, she has been attracting new audience all around the world.

She graduated from the Chopin Music University in Warsaw, getting a diploma with distinction and two-year postgraduate master degree studies  with Maestro Igor Oistrakh at the Royal Conservatory in Brussels, gaining the ?Grand Distinction? diploma in 2002. Since 2002 Piekutowska has been teaching at the Chopin Music University in Warsaw, since 2010 at the Art Academy in Szczecin now at the Associated Proffesor position.

She performed at Carnegie Hall and Lincoln Center in New York, Teatro Colon in Buenos Aires, Teatro Guaíra in Curitiba, National Center for the Performing Arts in Beijing, philharmonic halls in Santiago de Chile, Bucharest, Montevideo, Beijing, Wuhan, Tianjin, Hamburg, Kiev and the National Philharmonic Hall in Warsaw, as well as in many other cities.

Her discography consists of 10 CD records, six of which feature mostly 20th century Polish music. Three of her albums (Penderecki’s Violin and Piano Works, “Polish 20th Century Music” with works of Bacewicz, Lutosławski and Szymanowski, and Penderecki’s Capriccio for violin and symphonic orchestra) won prestigious “Supersonic” awards in Luxembourg. The first Polish violinist to receive the MIDEM Classical Award, she collected the prize in 2008 in Cannes.  Dedicated to Krzysztof Penderecki’s music, the awarded album features her performance of Penderecki’s Capriccio with the Polish Radio National Symphony Orchestra, conducted by the composer himself. The recording also won awards in Belgium, Spain and Italy.

The highlights of her career include more than 70 concerts in South America, including season opening of Teatro Colon with Buenos Aires Symphony Orchestra (the first performance in that hall of the second Wieniawski violin concerto), one in Montevideo with a Symphony Orchestra, numerous ones in Chile (Concepcion, Frutillar, La Serena, Punta Arenas, Valparaiso, Vina del Mar)  and with the Santiago de Chile Philharmonic Orchestra; this latter was declared in a radio poll to be the best soloist performance of the season. She performed a J.S. Bach Concerto for two violins with Igor Oistrakh in the National Philharmonic Hall in Warsaw.

It has been five years since she started touring the world with her own musical project: a solo violin recital entitled “From Bach to Penderecki”. So far, she has delivered the recital in Moscow, Bucharest, New York, Madrid and Beijing. It was also program of her tournée in Bolivia, Ecuador and Peru.

She has given master courses for many years, both in Poland and abroad, including Brazil, Chile, China, Canada, Peru and Venezuela. A teacher of the violin class at the International Music Courses in Łańcut since 2012, she  has also sat on the jury in a number of violin competitions in Poland and abroad.

Violin and piano recitals have always constituted an important part of her artistic career, as reflected by her repertoire, which contains over 30 sonatas.

In 2014 her newest CD presenting Brahms and Franck Sonatas was recorded on the occasion of the 15th anniversary of artist’s phonographic debut. In July she has received the special diploma “Leader of the future” in the project “25 new liders for the next 25 years of Poland”. Patrycja Piekutowska is the only representative of music industry in the whole group. In August she received a medal Gloria Artis awarded by Minister of Culture and National Heritage of Poland for her contributions in promoting Polish music abroad.