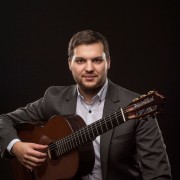 Perfection, excellent, amazing, sensitive virtuoso – these all terms come from the music critics` articles concerning Jakub Kościuszko. He has performed concerts in most of European countries and Japan, including such places as Tokyo Yamaha Ginza Concert Hall, Lutosławski Concert Hall in Warsaw and the Berliner Philharmonie. He has played as a soloist with the philharmonic orchestras of Szczecin, Zielona Gora, Lomza, Radom, Kielce and AUKSO chamber orchestra. In 2010 he released a world premiere recording with works of Marek Pasieczny, i.a. with the Threnody of the Victims of Bełżec, dedicated to Kościuszko. The debut album was highly acclaimed by the critics in Europe and USA. In 2012 he recorded a classical Guitar Recital with works by Bach, Tansman, Piazzolla, Jarrett and Metheny. The third solo album, Guitar sounds jazzy, contains music inspired by jazz and world music.

Jakub Kościuszko started to learn to play the guitar at the age of 8. At the age of 16 his biography was placed in the Lexicon of Polish Guitarists. In 2004 he graduated with honors from the Music School in Szczecin, where he was a pupil of Piotr Pałac. In 2009 he graduated with honors from the classes of Piotr Zaleski at the Karol Lipinski Academy of Music in Wroclaw and maestro Zoran Dukić at the Royal Conservatoire in The Hague. In 2010 he received a Diploma di Merito and
a scholarship from maestro Oscar Ghiglia during Accademia Chigiana in Siena. Since 2016 Jakub Kościuszko holds a Doctor of Musical Arts degree from the Academy of Music in Wrocław.
He regularly teaches guitar at international music courses, master classes and workshops. He is a laureate of several international guitar competitions, he participated in master classes of such great guitarists as: Abel Carlevaro, Oscar Ghiglia, Roberto Aussel, Pavel Steidl, Scott Tennant. Jakub Kościuszko plays a Bogusław Teryks guitar Nada Brahma Op. 157 stringed with D`Addario strings and uses DPA microphones.